What will Demand Side Response and Flexibility Trading Mean for Your Energy Supply? 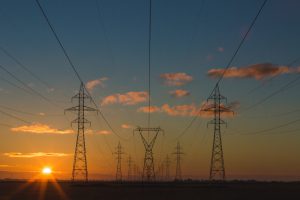 Photo by Matthew Henry on Unsplash

The contribution from wind and solar to power generation will only accelerate as their costs continue to fall and the world needs zero-carbon electricity — but these renewables come with some specific challenges: intermittency and inflexibility.
​
Likewise, transportation needs to ‘decarbonise’, and the adoption of electric vehicles will accelerate — but how will the resulting increase in electricity demand be managed by utilities?
​
To these two challenges, there is one answer: flexibility.

What does it mean? Put simply, it’s about adjusting local electricity demand and supply in the best possible way, by enabling the growing number of assets connected to the network, that can generate, consume and store electricity locally, to interact and to respond to real time signals.

The inevitable transition to a more complex power distribution system: 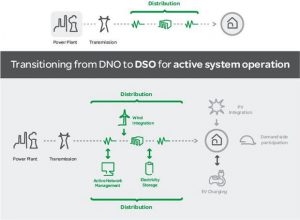 The concept is gaining traction globally, and in the UK, the government and regulator are strongly backing the idea — but how can flexibility be delivered in the real world?

Given the complexity of the task, we believe that there is a need for a market place for trading flexibility, in other words a platform where buyers and sellers of flexibility can interact, creating a positive network effect, and maximising the value of flexibility for the whole ecosystem.

This is exactly what Piclo (formerly known as Open Utility) is delivering. Indeed, Piclo is the perfect example of the investments that Green Angel Syndicate members are after: a company that can play a key role in enabling the low-carbon future that we all want, empowered by renewable electricity and a rapid shift to electric vehicles; but also a company already making rapid inroads in the UK and with the clear ambition to become a global leader, and hence providing the potential for a great return on investment.

The rise in renewables and the need for ‘flexibility’

Renewable energy is now the low cost, low carbon option of choice in markets around the world. Wind and solar energy costs are at record lows and are forecast to keep falling, enabling greater adoption.

Globally there is over 1,000GW of wind and solar in operation. It took us around 40 years to reach this milestone, but it should take us under five years to reach the 2,000GW mark. Such acceleration is essential if we are to meet the objectives of the 2015 Paris Agreement of limiting the global average temperature rise to 2°C.

Some experts believe that electricity could be 100% sourced from renewables by 2050, but even with less aggressive assumptions (e.g. Bloomberg NEF models 64% renewable energy by 2050), the integration of renewable sources into the grid is bound to further accelerate.

The UK is very much on this journey, having made good progress in the decarbonisation of its electricity supply.

Wind and solar: intermittent and inflexible

However, this growing contribution from renewables creates some very specific challenges. Indeed, solar and wind are highly intermittent, meaning that energy is only generated when the sun is shining, or wind is blowing — and hence ‘inflexible’, meaning that power generation cannot be adapted to demand, unlike that of a gas power station, for example.

Despite increasingly accurate forecasting, this inflexibility of solar and wind generation introduces challenges, both:

A well-known illustration of this issue is the famous ‘duck curve’ showing how, in California, the growth in solar generation over the past few years has led to a massive reduction in the net load around midday, and hence to massively increased ‘ramp-up’ in net load in the evening.

The ‘duck curve’: impact of solar power generation on net load in a distribution network 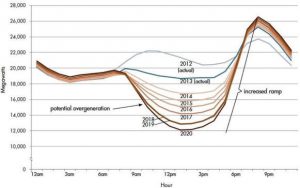 And the real-life power systems which will rely on many distributed wind and solar generation assets will face an infinitely more complex and unpredictable misalignment between power generation and demand than this simple duck curve. If not solved, this issue would lead to higher costs across the system and hence to a slower than desired adoption of renewables.

The large benefits of ‘flexibility’

The good news is that there are many ways to enable power to be consumed at times, and in places, where it is available — that is when it is being generated. Shifting demand to periods of high renewable availability is one of the key aspects of the concept of ‘flexibility’. It can be achieved in many ways, for example:

Rocky Mountain Institute has built a detailed model estimating the potential benefits of this type of flexibility for a typical power system in Texas, pointing to very significant value creation: compared to the same system with inflexible demand, the scenario with flexible demand enables a 36% increase in revenues for the renewable energy suppliers, reflecting the higher number of hours in the year when the entire system would be powered by renewables; conversely, the demand that would be addressed by fossil fuel sources would be lowered, enabling a 23% cut in system-wide CO2 emissions.

The internet of things, big data and batteries: key enablers of the ‘smart grid’

How can such flexibility be implemented in practice? This is where the digitalisation of the electricity system, also known as the ‘smart grid’, comes into play. In very practical terms, this mainly refers to three technological developments, which are taking place simultaneously:

Integration of new technologies into the electricity system

Integration of new technologies into the electricity system

As more areas of the value chain are digitalised and connected with data-gathering devices, the extent and quality of the data increase, and so the potential use cases for what can be accomplished through analysing this data becomes increasingly interesting and valuable. All these new generation communication and control technologies, once rolled out, will enable major loads to continuously respond to changing renewable supply levels and other market signals.

​EVs — an additional headache for the power networks?

Beyond power generation, the transport sector is the largest contributor to greenhouse gas emissions globally, and in some countries like the UK, it is now the largest source, as reductions in emissions from transport have been poor. Electric vehicles are the key solution to this problem, but also to the very pressing health issue of toxic air pollution from diesel fumes in cities. With the rapid fall in the cost of batteries, all experts and industry players predict that EV adoption will rapidly accelerate over the coming years. 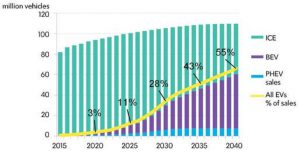 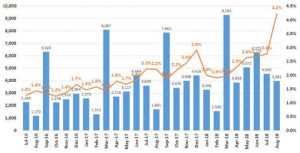 What will EVs do to power networks?

Although much more energy efficient than traditional cars, electric vehicles will consume power. But how much power, and with what impact on the electricity providers? The UK’s National Grid has provided very interesting estimates of electricity demand in different scenarios for EV adoption over the coming years and decades. 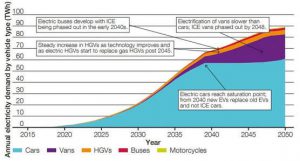 Unsurprisingly, these are very large numbers — but will they be manageable, or not? What really matters for the power networks is not the yearly electricity demand, but rather the peak demand, i.e. how much power is required by different users at a given ‘peak’ time of the year.

Unfortunately, today, most EV charging happens at home, and at peak time. This means that if nothing is done to manage it, EV charging could have significant adverse impacts on the power network in areas where constraints are already an issue.

‘Smart’ EV charging would mean that EV charging would be modulated or staggered to avoid surges in consumption, and shifted to times of day when demand is low, reducing the infrastructure required to support them.
total annual demand by 2050 would lead to peak demand increasing by only 6–11%.

In addition, electric vehicles’ batteries will also likely to be used as a source of power, for the house they are connected to and/or for the broader power network. This idea is called ‘vehicle to grid’ or V2G. At the household level, one consequence of V2G can be to take the home off-grid during peak periods — with the vehicle acting like a large battery for the home. National Grid expects that by 2040, V2G will be able to reduce peak demand by as much as 8GW, rising to 13GW in 2050.

To achieve such benefits, smart systems will be required that communicate with the wider energy system in real time to understand the optimal time(s) to charge or discharge. In effect, smart charging and V2G will probably happen automatically, without any consumer intervention.

The UK is embracing flexibility

The growth in wind and solar power generation at the community and household level; the ongoing acceleration in electric vehicles adoption; the much-needed electrification of heat over the coming decades; and the development in energy storage solutions, within the grid and behind the meter — all these point to a multiplication in the number and types of assets that can generate, consume and store electricity locally, and that can do it in a smart way, responding to real time signals, thanks to connected sensors and big data algorithms.

This will lead to a much greater complexity in managing power distribution systems, and hence to a growing market opportunity in enabling localised flexibility. A key requirement to achieve this is that the UK power networks should prioritise procuring flexibility services over and above traditional reinforcement measures.

In other words, companies should tackle network constraints by procuring flexibility services as a first measure, rather than by building expensive new network infrastructure. This would unlock three key sources of value:

Enter Piclo, a platform maximising the benefits of flexibility trading
Of course, such flexibility can be provided in traditional ways, through bilateral contracts between buyers — the local distribution networks — and sellers — end-customers than can adjust their demand such as large businesses or energy storage companies. However, there is a clear opportunity to do it better, through a marketplace for the trading of localised flexibility. This is exactly what Piclo is delivering with its innovative platform.

Such a platform, where all the different buyers and sellers can ‘see’ the market and trade flexibility, adds significant additional value for both the sellers and the buyers:

Bringing smaller providers into flexibility provision is crucial to scale the market, but complexity is a challenge. The platform can solve this issue. As UK Power Networks put it, “working with Piclo to create this unique trading platform will make it quicker, easier and cheaper for our customers to supply their services to the market”.

Green Angel Syndicate is proud to back Piclo, a company which can play such a central role in enabling the low-carbon future that we want, empowered by a massive growth in renewable electricity and by a rapid shift to electric vehicles.