What are we to do about heat?

COP26 looms, the heads of state have booked their hotels in Glasgow, the meetings have been set and agendas written. But still, no-one knows what we are to do about heat.

​​Although the first radiator system for heating a house was introduced in the 18th century, and the gas boiler was invented in 1868, by a painter and decorator named Benjamin Maughan, it was not until after the Second World War that gas-powered central heating really developed.Modern houses started to be built in the UK to accommodate the new form of heating, while a gas grid providing access to gas supplies was being constructed to cover the bulk of the country. Its benefits in terms of efficiency and cost were so considerable, that by the 1960s householders were retro-fitting their older properties so that, by the mid-1970s, the penetration of gas central heating among the population of UK households had reached the mass market. It reached 30% of all households in 1970 rising to 59% in 1980, and 79% in 1990. It had reached 90% by 2000. Saturation. 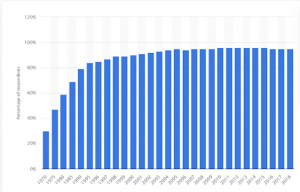 But although gas-powered central heating has become a universal solution for warmth, it was first introduced within many people’s lifetimes. In the history of the human race, it is still an incredibly recent phenomenon and we survived millennia without it. Yet now, the single biggest challenge in the fight against Climate Change is: how to live without it? Because gas-powered central heating has become an enormously dangerous and threatening problem.
​
Globally, heating our living spaces is now estimated to account for nearly half of all energy consumption, and 40% of energy-related carbon emissions. Just under 20% of the UK’s greenhouse gas emissions are caused by heating buildings, of which 77% are caused by domestic heat, which usually means gas boilers. It is the second largest single source of UK emissions after passenger cars. 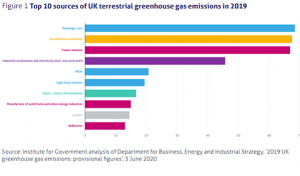 There is no clear solution. The Climate Change Committee has produced recommendations for the strategy to complete a transition to renewable heat by 2050, but this depends on innovation and product development that is not yet visible.Heat pumps are too expensive; hydrogen requires four to six times more energy than natural gas. Heat pumps effectively electrify heat, requiring completely new equipment, whereas hydrogen would continue to use the existing infrastructure – piping and radiators included. But hydrogen does not provide enough energy. The same can be said for solutions using solar or wind. Biomass is no answer to the problem, creating as many climate change issues as it solves. District heating is on the agenda in Government thinking, as led by the Climate Change Committee, but there is little mention of Geothermal energy, which has been a staple for many European regions.
​
The UK Government has already set targets for heat pumps – an installation rate of 600,000 pa by 2028, compared with 27,000 installed in 2018. But do heat pumps work? Ground source heat pumps require land, which many urban residences cannot access. Air source heat pumps have limitations, and considerable costs, which similarly restrict their scope. Heat pumps are only effective replacements in a limited range of properties.

Efficiency has been another policy target, by which the main means is insulation. But this too has been a hollow measure. Uptake of insulation incentives adopted between 2008 and 2012 was low; since then, retro-fit insulation rates in the UK have been negligible. The Green Deal, introduced in 2013, was a complete failure.
​
Much was staked on another stimulus to uptake introduced by the Government in view of the comparative success of the Feed-in Tariffs for solar and wind energy. But the Renewable Heat Incentive (RHI) has not only been a disappointment, it was even responsible for bringing down a Government in Northern Ireland. Introduced amid fanfare in November 2011, the RHI was supposed to build on the solar and wind incentives to give renewable energy a deep foothold in gas heating systems. It was intended to get to grips with the overwhelming problem of heating. Instead, it never even got close to its targets, limping through the ensuing decade without success of any kind. 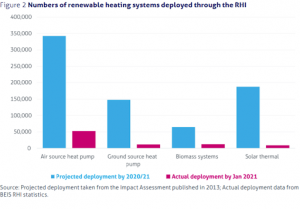 A Green Homes Grant was introduced in 2020 and has been an even more ignominious failure. In fact, it has already been cancelled, so great has been the outcry from both trade and consumers about its complexity, cost, confused rules and bureaucracy.

In other words, at the time of writing, there are no obvious solutions, no easy wins. Every pathway to a solution to the problem of heating in the UK is flawed.

Yet we must have a solution, and we are awaiting the next Government policy announcement designed to find one. The Heat and Buildings Strategy, which is intended to be the UK Government’s roadmap to decarbonising heat in the UK, has been delayed several times since its original planned publication date in Autumn of last year. We know this will address the target already stated of banning gas boilers. Originally the Government announced that the sale and fitting of new gas boilers would be banned in 2025. Then, in an adventurous moment, on 18th November 2020, a Government announcement brought the date forward to 2023, giving little more than three years notice for a fundamental change for the industry. In the ensuing uproar, the date was removed. A Downing Street spokesperson explained that “there had been a mix-up”.
​
The furore over the date proposed for the ban on the sale of new gas boilers, and the miserable failure of the Green Homes Grant to provide adequate resources, have both delayed the publication of the strategy paper.

It is not difficult to understand why. Those responsible for the plan are wrestling with alternatives, none of which appear to work. Grant designs (a Clean Heat Grant has already been unveiled as a possible route) will be improved, support for tradespeople training to improve the supply of a qualified workforce, and other support measures are all expected to be part of the strategy. But the central question of technology – heat pumps, hydrogen, solar, wind, or what? – is not only unresolved, it is wholly unanswered. How could policy to date have succeeded when there were no viable solutions to implement in the first place? The Renewable Heat Incentive was a well-intentioned piece of legislation, but what chance did it stand when every means of applying renewable heat (apart from biomass boilers, which are not a true solution to the problem) were both prohibitively expensive, and unfit for purpose.

Yet we must have answers. The impact of gas cannot be ignored, as the concentration of carbon in the atmosphere increases day by day, the temperature continues to rise and the climate continues to change. We see the transformation of our previously predictable and reliable economic environment into a world ravaged by extreme weather events and natural disasters, which will bring about a complete decimation of our global community as we know it.
​
So what should we be doing? What should we be calling on the Heat and Buildings Strategy to do? Scotland has already offered some of the answers with the publication of its domestic Heat and Buildings Strategy, but it too awaits the publication of the UK Strategy, without which it cannot be sure of its ground.

​Now is the time to bring forward real innovation in technology, innovation which can transform the basis on which we heat our homes without harming ourselves at the same time; without generating carbon emissions or other GHG emissions; without destroying our own eco-system. We need to see entrepreneurs and inventors stepping forward, making sense of the energy mix we know can be generated without harm. The system must be renewable and reliable, efficient and affordable. We need vision and imagination. We know so much about the variety and versatility of different energy deliveries. We must work with speed and agility to implement these.

I would end this short article with a plea, and an encouragement. Innovators, please step forward now. We can find the means for supporting you without delay and bureaucracy, but we need your ideas to break through the gridlock on the energy system with simple and effective solutions to this monstrous problem we have created in the last 50 years. We can do it. By working together and opening our minds to what is possible, we can beat this problem and become a community accessing warmth safely.