Powering the World on Renewable Energy by 2050 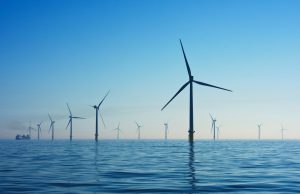 Photo by Nicholas Doherty on Unsplash

Can the world be 100% powered by renewable energy, and if so when? I believe so, by 2050. I know that this is an extremely ambitious target, and not the consensus amongst researchers, but think it is achievable thanks to three massive trends that we expect to unfold over the coming decades.

Such evolutions are essential if we are to avoid worst case scenarios for climate change, and they open a host of exciting areas where new technologies can make a big positive impact.

For early-stage investors like ourselves at Green Angel Syndicate, opportunities are not in financing the rollout of industrial-scale wind or solar farms, but rather in funding innovative enabling technologies, in both hardware and software. Start-ups developing breakthrough technologies in those areas are likely to get huge rewards. These include: 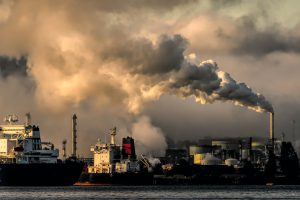 Photo by Chris LeBoutillier on Unsplash

Today, for all the talk about renewable energy sources and their stellar growth, the world is still largely powered by fossil fuels, which made up 79.9% of estimated total final energy consumption in 2018. This is a stark reminder of how long the way is if we are to power the world with renewables: what’s required is a complete energy revolution.

Looking at the problem is seeing the solution

In addition to coming mainly from fossil fuels, the world’s energy is largely wasted. Astonishingly, in a developed country like the US, less than a third of the primary energy consumed is useful. Yes, two thirds are lost: 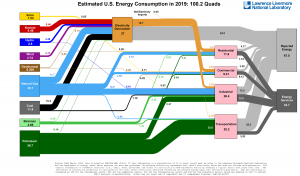 The 2019 energy flow chart released by Lawrence Livermore National Laboratory details the sources of energy production, how Americans are using energy and how much waste exists.

As such, moving away from fossil fuels comes with the very big prize of making the whole energy system far more efficient. The energy needed to power a world based on renewable electricity will be much less than that would be needed if we continued to rely essentially on fossil fuels.

This is illustrated in the following diagram from an article entitled ‘100% Clean and Renewable Wind, Water, and Sunlight All-Sector Energy Roadmaps for 139 Countries of the World’ (Jacobson et al, Joule, Sept. 2017) — which shows how the forecast change in the energy mix is complemented with a drastic 43% reduction in energy consumption compared to a ‘business as usual’ scenario. 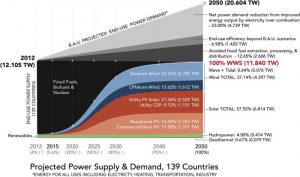 Forecasting 20 or 30 years into the future is bound to be risky. Even tiny variations in assumptions can lead to massive differences down the line — and it is therefore entirely logical that forecasts vary widely between sources.

However, one essential driver of the energy mix is clear: solar and wind are now more competitive than coal — and their cost advantage will only increase over the coming years. The question is therefore how quickly the shift towards renewable sources will happen, rather than if it will.

According to Bloomberg New Energy Finance, solar PV and onshore wind are now the cheapest sources of electricity. 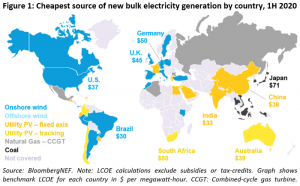 An earlier report by Imperial College’s Grantham Institute in conjunction with Carbon Tracker ( Expect the Unexpected, Feb. 2017) estimated, in their most ‘bullish’ scenario for solar PV generation, that renewables could represent three quarters of power generation by 2050, the rest coming from nuclear.
​
Finally, the most ‘aggressive’ article (Jacobson et al.) has a scenario where 139 countries representing >99% of global energy consumption are 100% powered by clean and renewable energy from wind, water and sunlight by 2050. The researchers have built an energy roadmap for all sectors in these countries whereby electricity powers everything including transportation, heating and cooling, and all industries. The energy mix by 2050 would include 58% solar and 37% wind. 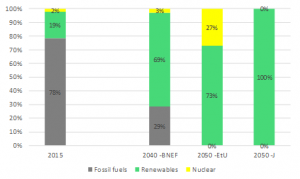 Are such scenarios realistic? One simple element is to consider how much space all these new wind and solar farms would occupy. The Jacobson article finds that this would be only about 1% of the land area of the 139 countries it has studied — hence clearly not a problem.

A more complicated issue is that solar and wind power are intermittent. To be used not only as an add-on but as the main source of electricity, they must be complemented with energy storage (to have electricity at the times of day when there is neither sunlight nor wind) and with technologies enabling an optimisation of energy consumption and distribution in time and in space.

We firmly believe that this will be made possible by the rapid innovation in three complementary fields: 1) batteries, which are becoming ever cheaper and more effective; 2) connected devices e.g. sensors and controllers, generating ever growing flows of real time data; and 3) computing hardware and software to analyse these data and act upon them.
Hence, we see a host of opportunities for innovative companies to capitalise on the shift from centralised, predictable fossil fuel-based electricity to decentralised, intermittent green power.

With air pollution in cities and climate change high on the agenda, more and more countries and cities around the world are introducing regulations favouring the shift from combustion engine to electric vehicles. In addition, EVs are on track to become cheaper than traditional cars before 2025 — here again, facilitated by the rapid decline in the cost of batteries (see our recent article on Electric Vehicles).

Depending on sources, EVs will represent anything between a third and all vehicles in circulation by 2050, compared to around 1% today (to achieve this, more than half of new car sales globally would be EVs by 2040, growing from 1% today to a quarter over the next 10–15 years). This will require a massive charging infrastructure for all these vehicles, with the related impact on the electricity grid.

Share of EVs in the stock of vehicles, globally 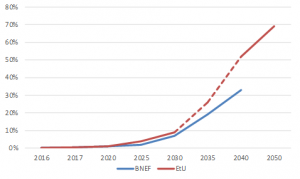 However, here again, the shift towards a decarbonised transport system may not be as daunting as it first looks.
Indeed, the ‘clean transportation revolution’ is not about merely replacing the billion+ traditional vehicles with electric ones: we expect the move to EVs to come hand in hand with the growth of transport-as-a-service, as privately-owned cars will progressively be replaced by fleets of shared autonomous EVs (at least in densely populated regions).

This should lead to a large decline in the number of vehicles necessary to address transportation needs. This is because, today, cars are very poorly utilised assets: they are parked, unused, 95% of the time — a massive waste of value and space, hence the huge optimisation opportunity represented by TaaS.

TaaS will succeed in the long run because it will be a much more cost effective and cheaper way of transport than individual car ownership. The ‘Rethinking Transportation 2020–2030’ report ( RethinkX, May 2017) models that 95% of US passenger miles will be provided for by electric and autonomous TaaS by 2030, this revolution mechanically leading to oil demand for US passenger road transport falling by 90% by 2030.

As we have seen, moving away from traditional power plants to renewables will eliminate massive energy conversion waste, and so will the move to electric vehicles and TaaS.

However, there will be more work to do in cutting on energy losses in industry, and in residential and commercial buildings (heating and cooling). Together, these areas represent 45% of energy consumption (in the US, 2016) of which almost half (20%) is lost.

Reducing these losses is about the materials used in construction, but also about making buildings smarter thanks to connected sensors and optimisation software — see my article on how the internet of things can unlock energy efficiency in smart buildings.

The key areas for early stage investment in cleantech

Investment in solar and wind farms is essential if we are to achieve the decarbonisation of the economy — but such investments are now of increasingly industrial scale. This does not mean that there are no attractive investment opportunities left for early stage investors like Green Angel Syndicate, quite the opposite in fact.
​
Over the past few years, cleantech was one of the fastest growing sectors for start-ups investment in Europe, and we expect further massive growth.

We anticipate exciting start-up opportunities in many different types of technologies enabling the green economy, that we regroup around three main themes: