Our Protector, The Big Blue 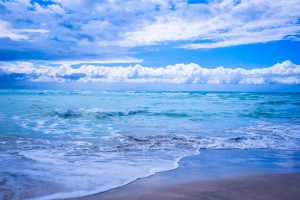 World Oceans Day is a day for us to come together to celebrate and reflect on one of Earth’s most vital resources. Covering 71% of Earth’s surface and holding 93% of its water, The Big Blue is responsible for preserving a balanced environment, and therefore a home where we can thrive. We celebrate the ocean for nurturing the fish that billions of people are reliant upon, and for producing over half of the world’s oxygen. But on this World Oceans Day, Green Angel Syndicate would like to dive a little deeper into how The Big Blue is vigorously mitigating the impacts of climate change.

How The Big Blue protects us

The Big Blue is protecting us from the immediate consequences of climate change through two essential processes: absorbing CO₂ and storing heat. The ocean is one of Earth’s largest carbon sinks, absorbing and storing half of all human-related carbon emissions. It absorbs CO₂ on the surface, which is redistributed by vertical and horizontal currents that transport carbon to the bottom of the ocean, where it is locked away for hundreds of millions of years. This long term storage space prevents CO₂ from being exchanged and accumulating in the atmosphere, therefore slowing down the greenhouse effect and subsequent global warming.

The Big Blue also plays a core role in keeping the planet cool, by collecting, distributing, and storing 93% of the heat produced by global warming. It is the best heat storage device on the planet, storing more thermal energy in its top 3 metres than the whole of the Earth’s atmosphere. The ocean deposits this heat by absorbing light at the surface, which is redistributed to greater depths according to the state of the water’s temperature and salinity. Colder temperatures reduce H₂O volume, whilst higher salinity increases its density, causing water to sink and circulate heat around the globe. The distribution and storage of heat is central in preventing large spikes in temperature, which protects us from numerous devastating climate change impacts; including extreme heat waves, drought, and crop failure to name a few.

The invaluable protection The Big Blue is providing us is not everlasting. Scientists have presented indisputable evidence that the ocean is suffering, and its capacity to continue to be our protector is being dangerously compromised. Absorbing excess human-related carbon emissions has resulted in a global decline of 0.1 pH between 1990-2014. In other words, ocean acidity has increased by 30% during this period, which has already presented devastating consequences for oceanic ecosystems and humanity. A renowned example of these consequences can be found among our treasured coral reefs. Coral structures that are reliant on carbon to build their skeletons will have difficulty doing so, because absorbed CO₂ undergoes a chemical reaction that binds carbonate ions, reducing their abundance. A reduced amount of carbonate ions available for corals to utilise when building their skeletons, is contributing to the degradation of a habitat that is home to 25% of all marine species.

Likewise, the ability for The Big Blue to store heat is diminishing. Rising temperatures have reduced oceanic mixing and hindered the process of distributing and storing heat. This is evidenced by the Atlantic Ocean circulation slowing by 15% in the last 200 years. Not only is the ocean’s capacity to distribute heat weakening, but the heat that has already been absorbed is resulting in numerous harmful ramifications. Such as sea level rise, habitat destruction and geographical shifts in species.

The Future for our Oceans and Ourselves

Unfortunately, the realities of climate change show a worrisome trajectory for a resource that is so integral for us to thrive on Earth. We critically depend on a healthy ocean to protect us. Without its continued protection, we cannot survive. As such, it is paramount to engage with World Oceans Day as a day to celebrate The Big Blue, but also to call for action to address these climate change impacts. The fundamental action we need to take is clear: protect the ocean, as it has protected us.

Transforming a call to action into practice, however, may feel overwhelmingly difficult. Green Angel Syndicate would like to encourage you that no matter how big or small, technical or simple, any action is valuable. Here at Green Angel Syndicate we invest in companies that bring new technology and innovative processes to the fight against climate change. To illustrate, portfolio companies Rovco and Oceanium are working in harmony with The Big Blue, to reduce carbon emissions and have a positive marine environmental impact. Rovco uses artificial intelligence to map the seabed in search for spaces appropriate for renewable offshore energy infrastructure; whilst Oceanium uses seaweed to produce sustainable cosmeceuticals, plant-based foods and materials. In light of the leading role Green Angel Syndicate is taking in fighting climate change and protecting the ocean, an impactful action we urge you to take is to continue supporting us and our work.