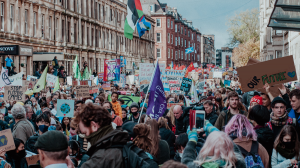 Image by William Gibson on Unsplash.

COP27 is happening soon.  It starts on 6th November, to be precise, and will run for two weeks.  It is happening in Egypt this year.

The 27th COP on Climate Change will happen against the background of war.  War in Ukraine has derailed many of the world’s major nations as a consequence of the crisis in energy supplies it has caused.  Civil war in Somalia is precipitating one of the worst African famines in decades.

This is in stark contrast to COP26, delayed by the Pandemic, which finally took place in November 2021 in Glasgow.  President Zelensky attended and spoke.  President Putin attended remotely and spoke, a strong Russian delegation was present and actively participated.

There is however strong precedent for international cooperation to transcend conflict and hostility.  In 1987, when the Cold War was still active and intense, however close it turned out to be to the final collapse of the Communist bloc, both the Russian Federation and the bulk of the bloc itself became signatories to the Montreal Protocol agreeing to ban CFC’s in the attempt to heal the hole in the ozone layer.

This was successful.  It was one of the reasons that the climate change lobby, already formed effectively in the US by Senator Al Gore’s sub-committee on the subject, felt there to be no barriers to similar international cooperation for the reduction of carbon emissions responsible for dangerous levels of global warming.  But when a similar international treaty to the Montreal Protocol on CFC’s was introduced to limit carbon emissions in 1989, it was vetoed by the US, UK and Japanese delegations to the first ever international conference on Climate Change held in the Netherlands.

It was another eight years before the Kyoto Protocol was signed at the end of 1997, and eight years after that before it actually came into force in 2005.  By that time, US had withdrawn from the Protocol, in spite of being a signatory in 1997.  And carbon emissions noticeably worsened.

This foreshadowed a similar withdrawal by the US regarding important climate change agreements in Paris in 2015.  Donald Trump took power the following year, and made the decision to withdraw from all the Paris agreements on Climate Change.  President Biden has subsequently reversed this decision, though not before Trump was able to do considerable damage shoring up the coal-based economy in the US during his four-year term in the White House.

“The 27th COP on Climate Change will happen against the background of war…in stark contrast to COP26, delayed by the Pandemic.”

A spirit of hope, despite the challenges

So we come to COP27 in a spirit of hope that cooperation is possible, in spite of the war in Ukraine.  Failure has dogged the COP’s.  But it has not been caused by conflict.  It has been a result of narrow national interests, economic protectionism and international jealousies.  Political will has been lacking.

Sadly it still is.  The war in Ukraine has been used as an excuse for a wholesale return to fossil fuels, although its most obvious consequence is in fact a shortage of gas.  In the UK, the ill-fated Truss Government still had time to announce 100 new licenses for exploration in the North Sea to be increased.  It anticipates expanded use of the energy forms which have caused so much of the damage to our climate, rather than reduction.  It used an argument about the carbon emissions caused by importing oil and gas to justify this abandonment of its earlier commitments.

By the same token, the commitments made by nearly all nation states at COP26 just one year ago have been ignored.  The Glasgow Climate Pact, signed by all present in Glasgow, was an historic agreement to phase out fossil fuel subsidies, calling on countries to make more ambitious plans towards this goal.

These climate goals are known as Nationally Determined Contributions, or NDC’s.  These are the targets which need to be made more ambitious in the plans required by the Glasgow Climate Pact.  A deadline of 23rd September 2022 was set for submission of each Member State’s plan.

Currently only 23 out of 197 Member States have submitted.  Of these, several have not in fact altered their goals, which remain as they were prior to the Pact signed in Glasgow.  Among those whose updated plans contain no increase in targets are included the largest emitters in the world: US, China, India, and Brazil.  Indeed, the host of COP27, Egypt, is also among their number.

Most disappointing of all, this failure is not a consequence of the war in Ukraine.  Months before this happened, the momentum from Glasgow had disappeared and the apparent commitment to change dissipated into vague statements of principle.  Once the media circus moved on, the politicians relaxed.

Then came war, and all talk of climate change was off the table.  Explicitly.  The UK has removed the Green Levy on household energy use, once a clear plank in its energy policy.  It had been a token of the price of polluting required to be paid for clean energy technology.  This was sacrificed with barely a sound of protest.

Currently only 23 out of 197 Member States have submitted.  Of these, several have not in fact altered their goals, which remain as they were prior to the Pact signed in Glasgow.

But the barriers between war and peace are blurred.  Normal life is as much part of one as of the other.  Tolstoy’s vision in his famous work shows a world in which community life maintains its significance in the face of huge national disruption.  The context changes, but not the content.

His description of the Battle of Borodino shows Napoleon, a tiny figure on a distant hillside, having almost no effect on the outcome of the battle or the nature of its engagement.  In effect, he is powerless.  Instead, the ineluctable force of the groups meeting one another for their own purposes dictates outcomes, and this force arises from the origins of these groups.  War stems from peace and concludes in peace.

Tolstoy was reflecting the view of historians in the second half of the 19th century.  In direct contradiction to Carlyle’s theory of Great Men, and their influence over events, Thomas Babbington Macaulay developed a social theory of history, in which historical events are entirely controlled by the economic, social and cultural trends within the community, and Tolstoy had been heavily influenced by this apparently exciting new theory in the late 1800’s.

For us today, COP27 might still succeed, if we can escape from the politics of Putin and Zelensky, if the societies they represent are able to assert their needs and wishes independently of the conflict that continues; if we can engage with Somalia, in spite of the Civil War.

The UK has an important role in this.  It holds the outgoing Presidency of the COP.  The UK arrives in Egypt as sitting President and hands over the role.  As such, what are its objectives?

These have been stated as fourfold, as follows: 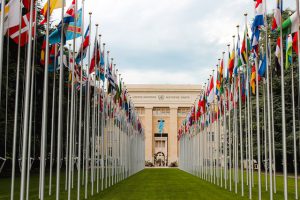 Image by Mathias Reding on Unsplash.

Egypt has already warned the UK against “backtracking on the global climate agenda” after it has seen Liz Truss issuing the new licences for the North Sea, reversing the ban on fracking, and removing the green subsidies.  She also forbade the new King, Charles III, from attending let alone speaking.  These are astonishing diplomatic interventions, without any precedent in the history of the COP’s.

It is perhaps a reflection of the urgency that now surrounds climate change.  More and more sections of the global community are facing the consequence of inaction, or inadequate action, over the course of the last forty years.  It is not enough for them now to hear platitudes and good intentions.  They must see real change if we are to succeed in addressing the problem.

Tolstoy might not have had the solution.  But his idea of the puny influence of individuals in the seats of authority over those inescapable forces is hard to challenge.  The inescapable forces are now dominated by nature itself, and how climate is changing the world we inhabit.  We are all now being affected. The most vulnerable among the global community appallingly so.