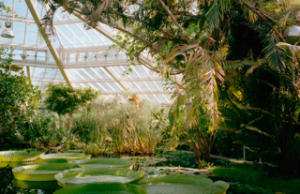 This question has been on my mind recently, owing to an interesting experience. Last week, I counted myself fortunate to be invited to a private viewing of the work being undertaken by the Royal Botanic Garden Edinburgh (RBGE), in what they call the Edinburgh Biomes project.

It was fascinating.  The purpose of the project is, as described by Simon Milne the head of RBGE, to “safeguard the National Living Plant Collection, protecting this leading international scientific resource and providing a “safe house” for threatened species.”  The project requires the restoration of their glasshouse accommodation, which is in itself a rare treasure.  The 1960’s built glasshouse was a prize-winning architectural departure in its time.  But the Palm Houses are the real gems, built in 1834 and 1858, the latter still being the tallest glasshouse in Europe.

They have been occupied without a break since their opening in the 19th century. For the first time in their history, the glasshouses are being emptied of plants for the purpose of restoration. 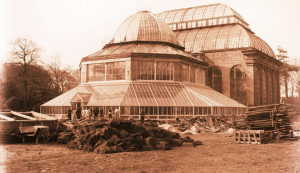 Edinburgh Palm Houses on construction of the second in 1858. (Royal Botanical Garden Edinburgh)

As well as seeing these beautiful buildings, and touring the collection itself, we were given a fascinating talk by Peter Wilkie, who is a Senior Researcher at the RBGE in the Tropical Diversity Section.  Peter’s particular specialisation is the family of trees known as Sapotaceae.  These are a family of flowering plants, which include about 800 species of evergreen trees and shrubs in 65 distinct types. Their distribution is pantropical, although Peter’s work has been mainly in Malaysia.  And they are a threatened species. Peter’s work, and the work done by the whole team in RBGE, is driven by a wish to conserve threatened botanical species all over the world.  They are playing a crucial role in attempting to stem the Biodiversity loss in remote parts of the world, where we are losing plant species we did not even know existed.  In a research paper published in 2015 by The Annals of the Missouri Botanical Garden, its authors argue “that there are 450,000 species, two thirds of which live in the tropics, a third of all species are at risk of extinction”.  But this represents the minority of plant species actually living on the planet, under the threat of extinction.  Estimates vary, but 450,000 represents between one third, or as little as one quarter, of the total number of species on the planet, the balance being made up of species that have yet to be identified and classified.

This voyage into the taxonomy of plant life was gripping.  Listening to the authoritative voice of the explorer himself, telling of his journey into the far reaches of plant life on our planet, was compelling.  It was easy to understand how Peter himself has given his working life to the task of this valuable conservation work.

But was I fortunate to be asked?  The reason for the invitation was that they wanted to ask whether I would become a donor.

My entire working life is committed to finding ways of making those innovative activities we require to fight climate change effectively become commercially viable, in the belief that philanthropy and Government grants will never make anything sustainable in the long term.  Conservation is a perfect case in point.

Conservation has been dependent on philanthropy and limited Government grants since it began in the 19th century.  Its activities have swollen, which is not a surprise.  The damage to the natural world caused by human activities has increased enormously since conservation was first recognised as a worthy aim.

But it has completely failed to keep pace with the scale of the damage being done to the natural world.  Instead of securing and ensuring the future of our eco-systems and all that live within them, the results of conservation supported by philanthropy and Government grants over the last century and a half have been a catastrophic failure.  We are witnessing now the most appalling biodiversity loss since the last mass extinction.  It is so severe that many serious and respectable commentators believe we are, in fact, witnessing the early stages of the next mass extinction.

As Sir David Attenborough himself is quoted in supporting the Biomes project: “We destroy plants at our peril.  Neither we nor any other animal can survive without them. The time has come to cherish our green inheritance, not to pillage it – for without it, we will surely perish.”

Philanthropy is not enough.  Commercially viable projects and activities are essential.  But how can you make conservation pay?

Where is the commercial return from Peter Wilkie’s work with his Sapotaceae?  If we cannot answer this question, the danger is that his work will never succeed to the extent that we need it in the long term.

The desperate reality is that his work should never be dependent on philanthropy.  It should never be classified as the “Good Works” so often associated with philanthropy.  It is work; the success of which will influence the viability of human life on the planet.  Is that worth paying for rather than donating to?  Of course it is.  It is associated with the value we place on our own lives.

But how can you translate that value into a commercial transaction, by which Peter Wilkie is paid cash in return for the outputs and outcomes of his work with the Sapotaceae?  The first, most obvious point is to define what those outcomes are.  Define what we might pay Peter’s operation for.  What do we get in return?  This question is far removed from philanthropy.

There are embryonic answers.  Perhaps the most advanced is carbon credits, of one kind or another.  Carbon credits are purchased, either via a voluntary scheme or through regulation, by companies in proportion to their carbon emissions.  There are many different schemes, but all work on essentially the same principle.  The carbon credits are translated into cash in support of accredited carbon reduction projects, many of which are nature-based.  These could help Peter and RBGE, if they are recognised by any of the schemes.  Maybe they are already.  I don’t know.

There are other answers, with greater integrity.  Rewilding is one.  Isabella Tree’s wonderful work at Knepp, an account of which can be found in her book, Wilding, is a leading example of how rewilding can be made to pay.  It uses a combination of commercial channels, the biggest of which is ecotourism.  Benedict Macdonald takes up the same theme on a national scale, dealing with the possibility of rewilding the whole of Britain on a commercial scale in his book, Rebirding, and creating an entire economy around it.

But neither of these solves Peter’s problem.  How can specific conservation work of the kind undertaken by RBGE pay?  How can it escape the dependency on philanthropy and Government grants?  How can the value of the work be translated into a commercially viable and sustainable context?

I have no answers to the question right now.  But I am committed to finding them, because I am certain that continued dependency on philanthropy will only mean continued failure to arrest the chronic biodiversity loss that Peter and RBGE are desperately fighting, and that in turn will mean that we will all perish, as David Attenborough so poignantly points out.  The more people who join in this task, the more likely we are to find viable answers.