Photo by Asile Clairette on unsplash

They say that the body will obliterate pain in one area when a greater pain takes precedence in another area.  The mind can only concentrate on one pain at a time.

For the first part of 2021, we were obsessed with the Pandemic.  The second half of 2021 saw an upsurge in climate change anxiety, as Covid retreated into the shadows of public concern (though not into any really meaningful reduction in infections).  2022 has been dominated by soaring energy costs, shocking rises in inflation and an economic crisis of unprecedented scale, even by the standards of the 2020 economic collapse caused by the Pandemic.

So sea level rise, owing to ice melt caused by global warming, has gone largely unnoticed in 2022.  Yet this has reached hitherto unknown levels, with the most profound consequences now threatening to become a reality far more quickly than had been supposed.  Coastal cities including New York and London will be flooding regularly and becoming uninhabitable unless we can contain this trend.  The signs are currently that we cannot.

The loss of ice in Greenland

During the three day heatwave in the UK that caused temperatures to rise above 40 degrees for the first time since records began, Greenland was losing 6 billion tons of ice per day – a total of 18 billion tons over the three days.  To put this in perspective, NASA estimates that Greenland’s average ice loss had previously been 0.77 billion tons per day.  6% of the average annual loss went in those three days, the equivalent of 22 days of “normal” ice loss.

It is difficult to estimate the impact this has on sea levels.  There are numerous different estimates, and indeed last February, the California Institute of Technology (linked to NASA) published a report drawing attention to the unequal distribution of sea level rise.  Its report notes the significance of parallel changes in land levels.  Coastal land levels are not stable, some are rising, while others are actually sinking.  Land around the Gulf Coast, for example, is sinking, “crumpling like an empty plastic bottle” according to the report.

This is not so much due to geological or climate conditions, but the subsidence is principally a consequence of the Oil & Gas companies extraction of oil & gas from the sea bed at an industrial scale.  Whatever the cause, the sea level rise in relation to the adjacent land mass will be much greater here than elsewhere.  This would have happened if the sea level had remained unchanged.  In one area called Baytown, the nearby drilling works owned and managed by Exxon have caused a drop of more than 11 feet in land levels.

NASA estimates that Greenland’s average ice loss had previously been 0.77 billion tons per day.  6% of the average annual loss went in those three days, the equivalent of 22 days of “normal” ice loss.

The truth behind rising sea levels

But the sea level has not, and will not, remain unchanged.  Much worse than that, its rate of change is accelerating.  Estimates vary, and it is hard to trust in the accuracy of projections which are subject to so much uncertainty.  Horrifying figures are used quite freely.  If, for example, all the glaciers and ice caps in the world were to melt, the sea level would rise by 70 meters according to one estimate, meaning that all coastal cities and communities would be not just under water, but completely submerged to a point of virtual invisibility.  This does not even take into account the parallel effect of higher sea temperature also contributing to sea level rise.

But this is not going to happen.  It is a theoretical calculation designed to scare us, which ends up being more like something out of science fiction.  It is easier to estimate what is likely to happen by extrapolating from the trends which have happened.  NOAA Climate.gov is a useful source.  NOAA stands for National Oceanic and Atmospheric Administration, and is a US Federal Agency which is not given to apocalyptic pronouncements.

NOAA calculates that the sea has risen by an average of 1.6 millimeters per year between 1900 and 2018.  But if it restricts its calculations to the most recent period, 1993-2020, the annual average has risen to 3.4 millimeters.  This escalation gives NOAA serious cause for concern, because it expects the rise to escalate. 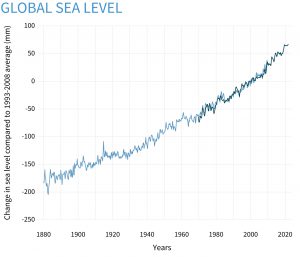 This is the chilling conclusion reached in their most recent report: “As global temperatures continue to warm, additional sea level rise is inevitable. How much and by when depends mostly on the future rate of greenhouse gas emissions. But another source of uncertainty is whether big ice sheets in Antarctica and Greenland will melt in a steady, predictable way as the Earth gets warmer, or whether they will reach a tipping point and rapidly collapse.”  The rate of loss in Greenland during the three hottest days ever in the UK makes the likelihood that a tipping point has already been reached very strong indeed.

If, for example, all the glaciers and ice caps in the world were to melt, the sea level would rise by 70 meters according to one estimate, meaning that all coastal cities and communities would be not just under water, but completely submerged to a point of virtual invisibility.

The future they are anticipating is transformative.  We have allowed talk of climate change to take on a note of self-recrimination and doom in the last few years.  The language of extinction embodied in various public lobbying groups and protest movements, as well as their demonstrations of civil disobedience, has turned climate change into a familiar media balloon.  We all look on in something close to wonderment.  It is reminiscent of our treatment of the nuclear threat during the cold war.  Much like that threat, as soon as a bigger pain like inflation and domestic economic disaster comes along, we put the fear of climate change aside, as we did with the fear of nuclear war.

Here we are now, waiting for economic disaster to burst into its full horror.  Meanwhile, something beyond disaster is taking place elsewhere.  We do not even spare a thought for Greenland.  What must it be like for the country’s small population of 56,000 souls?  It is transformative.  Their entire culture and way of life is being transformed, as they watch the ice, which has characterised their living environment for as long as their history recalls, disappear.

We do know what transformation means.  History and our parents or grandparents can tell us.  Their worlds were transformed by war and the consequences of war.  Ordinary life, as they had known it, became completely distorted, warped into a shape that was unrecognisable only a few months before, and was to last for decades.  Ordinary life, as they had lived it, was never to return in the same shape as had existed before the war.  The statement goes for both world wars.

Economic crisis of the kind we are facing right now is, quite fairly, the greater pain.  It hurts now, and it will hurt more in the coming months.

But the underlying pain will not disappear.  Climate Change will reemerge from the spasms of anguish caused by the economy and energy problems, and the time will come when the pain it causes will dwarf all else.

Can we do something to make a material difference to its onset and the brutality of its effects?  Yes, we can, we can do everything possible to arrest and reverse its direction.  And we can do everything possible to adapt to the changes it has already caused and is bound to cause in coming years.  This is our duty now, we need to concentrate on it, even while we are feeling the pain of economic disaster.

Perhaps the strangest feature of climate change, unlike every other transformation we have recognised in recorded history, is that it is global, however different its manifestations are in different parts of the world.